You are invited to our 55th Spring Tour of Homes Preview Party at the Albert Pike Hotel, 701 Scott Street, to kick off this year’s tour in the MacArthur Park Historic District. We will introduce you to the houses selected for this year’s tour, serve up some delicious food, a signature cocktail, and listen to some great music by local band Whale Fire.

The Spanish-Revival style Albert Pike Hotel was built in 1929 at a cost of one million dollars. It was one the best known hotels in Little Rock until the 1970s. According to the National Register Listing for the building published by the Arkansas Historic Preservation Program, ““The main significance of the Albert Pike Hotel lies not in the site on which it stands nor in the man for whom it was named; rather the real significance lies in its vivid reflections of a bygone time and an architecture appropriate for that time. The Albert Pike was built in the year of the great crash, but as near as the crash and depression were, the time was still the Roaring Twenties when the hotel was built. It was still a time of spending, speculation and naïve economic optimism. The lavishness of the hotel’s architecture is a kind of social art reflecting that time of high living so soon to end.” 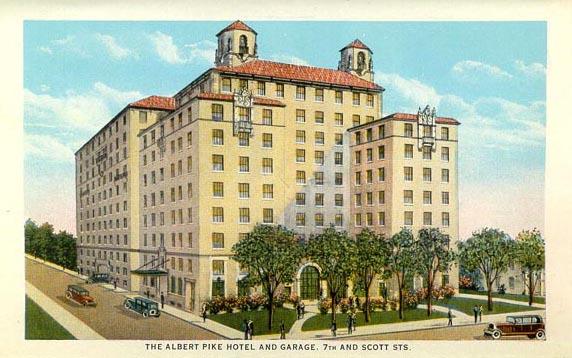