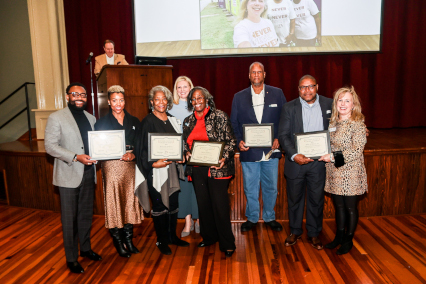 On the Day Terri Jeffries reached out to QQA Executive Director Patricia Blick asking for assistance, Patricia began an intense and challenging collaboration with Belynda Jeffries and Terri Jeffries to develop a strategy to save their father’s building at 2901-2903 Martin Luther King.

By the time the Jeffries sisters connected with the QQA, the property had been approved for demolition by the Little Rock Board of Directors and destruction was inevitable.  However, the family and their team were not deterred and made the investment to establish a non-profit to support efforts to raise much needed capital funds. The Jeffries engaged architect Kwendeche to evaluate the building, prepare the Arkansas Register nomination, and make recommendations for immediate stabilization and securing the property. The property was listed on the Arkansas Register on April 3, 2019.

The Jeffries Family was in a Catch-22. In order to save the building, and get it removed from the demolition list, they needed to undertake repairs, but since it was on the demolition list they were not able to get grants or financing to make the required repairs.

The Jeffries and Patricia decided the only way to save the building was through public outreach. Efforts to change the mind of the City Board of Directors was unsuccessful. The press was contacted, the QQA launched a petition, and the team made their case during the public comment period at several of the Board of Directors meetings.

At a point when all seemed lost, a contract for demolition already awarded, and there were no more options, an opportunity appeared. City Director Doris Wright, spoke up at a City Board Meeting and questioned the need to demolish the building. This brave action was necessary to get the demolition back on the Board’s agenda for reconsideration, and hopefully reversal.

On November 10, 2020 at the City Board of Directors agenda meeting we connected with Stephanie and Myron Jackson. They had seen the media coverage and reached out and reached a resolution with the Jeffries to take ownership of the property to save and restore it.

The Board of Directors voted to remove the Murphy-Jeffries Building from the demolition list on November 17, 2020. True to their word, the Jacksons have started work on the building.